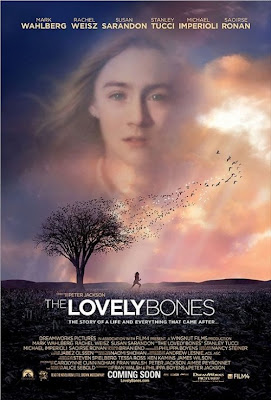 Peter Jackson should not make movies about murdered children. His The Lovely Bones, released last year and based upon the novel of the same name by Alice Sebold, attempts to create some type of macabre suburban fairy tale about the immediate afterlife of Susie Salmon (the talented child actress Saoirse Ronan), who died at the hands of the vile and villainous George Harvey (Stanley Tucci). Think of it as What Dreams May Come meets Little Children.

It's a little too creepy for a film about a child in the afterlife, and a bit too sentimental for a film regarding the hidden existence of a neighborhood child killer. Really, the film doesn't know exactly what it wants to be. Treatise on the hereafter? Murder mystery? Detective story? Coming of age story? Social commentary? Whatever the case, it didn't work.

This is perhaps strange, for Peter Jackson, back in the day, made a fine film about children who are also murderers. That film, of course, was 1994's Heavenly Creatures, starring Melanie Lynskey and Kate Winslet as two teens who plot to kill one of the pair's mother.
Posted by Ransom at Saturday, July 10, 2010
Labels: Films of the 2000s

I deplored this film and don't know what Jackson was thinking experimenting in a story about a murdered teenage girl.

I haven't read the Alice Sebold novel and allow that it may be better, although I honestly have no appetite for it. Because of the film, I don't trust the possibility of this story now, especially given the sad and brutal story arc you must work though to reach the weak ending.

Simply, 'The Lovely Bones' is a beautiful story. Hard to read, heart-wrenching in parts, but well worth it. The emotions it subjects you to are honest and true, and that is a rare thing.

I love this movie and saw it like 13 times. and also red the book. I bought the DVD blueray a few years ago, but my blue ray machine bit the dust, so i just bought 2 of the regular DVD 's of this movie, one for my cousin and one for me.