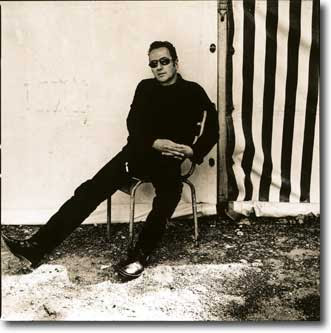 Joe Strummer
Lead Singer, The Clash
(August 21, 1952 - December 22, 2002)
This past Saturday would have been the fifty-eighth birthday of Joe Strummer, the lead singer of the Clash, who died in 2002 at age 50. I can't say that I was fan from the beginning, or even from the middle. I was too young to really be into The Clash before they imploded and sunk into the depths of pop culture history in 1985. I became acquainted with them in several ways in the early 1990s. My parents, of all people, introduced me to the 1989 Jim Jarmusch flick Mystery Train, in which Strummer appeared as a swaggering Memphis hipster soon to be on the lam. Some friends of mine used to cover "Should I Stay or Should I Go?" during their gigs back in early high school. Most John Cusack movies are littered with Clash references. Since then, though, I've gotten into them heavily and now own all of their records. I don't subscribe to all of that hype about them being the only band that mattered, but all of their tunes were fueled with an energy that is absent in most mainstream music. A few links for you: