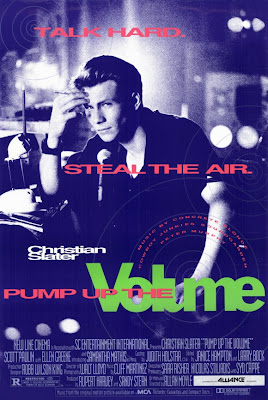 Twenty years ago today, on August 22, 2010, the film Pump Up The Volume was released. Written and directed by Allan Moyle, and starring Christian Slater and Samantha Mathis, the film chronicles the exploits of a pirate radio deejay adjusting to a new high school. The soundtrack was impressive, as it included Concrete Blonde, Soundgarden, the Pixies, Sonic Youth, Bad Brains with Henry Rollins, Peter Murphy, and the Cowboy Junkies. Not bad for 1990. Of course, I need not write the perfect nostalgic piece on this film, as that task has already been accomplished by someone else. On August 27, 2008 (coincidentally, the week of the film's 18th anniversary), Ryan S. at The League of Melbotis revisited the film and gave it the nostalgia treatment. Check it out, as we here could not have said it better ourselves.
Posted by Ransom at Sunday, August 22, 2010
Labels: 1990, Alternative Rock, Films of the 1990s

I love this movie, haven't seen it in years. PS Write more, I miss it.