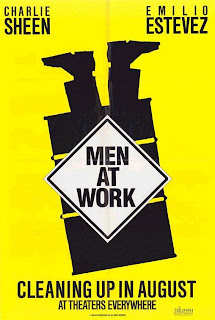 Twenty years ago today, on August 24, 1990, the film Men at Work was released. Written and directed by Emilio Estevez, the film stars Estevez and his brother, Charlie Sheen, as two eccentric California garbage men who find themselves caught up in some political and criminal intrigue. Fun fact: Leslie Hope plays the love interest of Sheen; she would go on to play Teri, Jack Bauer's wife in "24," with Estevez and Sheen's Young Guns co-star, Keifer Sutherland, eleven years later. Nearly three years ago, we here at this site did a piece on this film and our very favorite scene therein. See it here.
Posted by Ransom at Tuesday, August 24, 2010
Labels: 1990, Modern Film