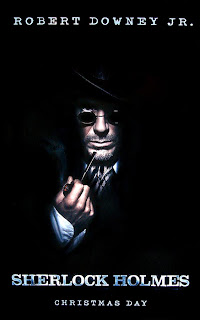 Back in February of 2006, Frank Decaro of The New York Times reported on the DVD release of the 1960s sci-fi television show "The Time Tunnel" (a series about which I know little, though I suspect that it has not aged well.). In profiling the series, Decaro described the philosophy of the show's creator and producer, Irwin Allen, which pretty well encapsulates that of director Guy Ritchie, whose new Sherlock Holmes flick starring Robert Downey, Jr. is now in theatres.

Later known as the master of such disaster films as "The Poseidon Adventure" and "The Towering Inferno," Mr. Allen infamously considered his TV series "running and jumping" shows. To his mind, the stories didn't need to make sense as long as those screens were packed with action, smoke and flying sparks. "Time Tunnel" embraced substantially less science and considerably more fiction than its competition that season, NBC's "Star Trek."

I saw Sherlock Holmes on Christmas Day, its opening day, and I was underwhelmed. Although there has been some critical commentary noting the chemistry between Holmes (Robert Downey, Jr.) and Watson (Jude Law), I saw nothing of the sort of screen. We are thrown into the dying days of the detective pair's working relationship, and action flicks with lazy back stories are dangerous animals, indeed. (To boot, we are instructed to take note of the past relationship between Holmes and Irene Dalton (the vacant Rachel McAdams), although there is little interesting there, either.). Essentially, what Ritchie has produced is a steam punk procedural cop show, a CSI: 1891 London, in which Holmes and Watson solve one relatively boring case - which may or may not have supernatural implications - over the course of two hours. There are the requisite number of explosions and fisticuffs for a movie of this sort, but nothing visually innovative. Ritchie throws at the viewer the action, smoke, and flying sparks, thrown in with some soot to suit the era, just as Irwin Allen would have done. Downey is given the unenviable task of carrying the film and distracting the viewers from the various plot holes and inconsistencies in the screenplay. (Was the thinking that because he was so fun to watch in Iron Man that he could play any quirky anti-hero and audiences will show up to the theatre in droves?) Big budget Hollywood films based upon larger than life characters should be a joy to watch, not an exhausting afternoon of forgiving narrative mistakes and omissions. Yawn.

Of course, I was greatly amused to see one reviewer on Twitter, David Hogarty a/k/a The Lexiphane, remark that Downey's portrayal "owe[d] more to Bill Pullman's Daryl Zero in 'The Zero Effect' than Basil Rathbone's Sherlock Holmes." He's got a point there.