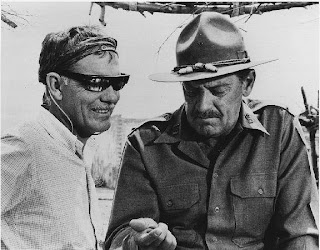 Peckinpah, pictured above with the actor William Holden.
Famed Hollywood director Sam Peckinpah, known as "Bloody Sam" for his violent films of the 1960s and 1970s, died twenty five years ago today, on December 28, 1984. Perhaps his most famous work is 1969's The Wild Bunch, featuring William Holden and Ernest Borgnine in one of the best representatives of the revisionist Western genre. If you've not seen it, do so promptly. Other stellar works include 1975's "The Killer Elite," 1973's "Pat Garrett and Billy the Kid," and the disturbing 1971 film, "Straw Dogs." Most of his work is on DVD, and some, including The Wild Bunch, is now on Blu-Ray. He would not live to see how much of an influence he had on Quentin Tarantino, whose first heist film was released eight years after Peckinpah's death. Tarantino's rise to fame in the early 1990s brought Peckinpah's work to a new generation of eyes, including many who are now making films themselves. Rest in Peace.
Posted by Ransom at Monday, December 28, 2009
Labels: 1984, Classic Film, RIP

Perhaps it is also worth noting that the death of Peckinpah lo these years ago is one of the contributing factors to Jerry Harvey's (of Z Channel) un-hinging.

Interesting that you mention The Killer Elite as notable, which I'd always considered second rate. Part of me likes his final film, The Osterman Weekend much more, but this may be because I've only ever seen the former pan and scan on VHS, while I've seen the latter letterboxed on DVD.