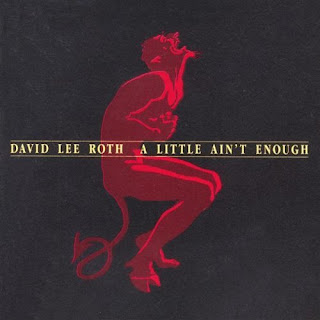 It is possible to calculate the exact moment in the career of David Lee Roth when he sank from puerile hard rock showman to utterly irrelevant self parody. It was January of 1991, when his new album, A Little Ain't Enough, hit record stores. Perhaps it's unfair to opine that the record suggests a total lack of self awareness; perhaps Roth, even at his most silly, knew exactly what he was and how he was to be perceived by the ages. But it is startling to note that this record, released in the first month of 1991, arrived only eight months before Nirvana's Nevermind. According to Wikipedia, the video for the title track was banned from MTV, but nearly 19 years later, surely no one remembers that fact, or much else, about this record.

By 1991, six years had passed since Roth had left the mighty hard rock outfit, Van Halen. But even after that, he showed some promise as a rock star. In the mid to late 1980s, he had pieced together a respectable hard rock band, with guitarist Steve Vai and bassist Billy Sheehan, (both of whom played with Roth on his 1986 album, Eat 'Em and Smile, as well as its 1988 follow-up, Skyscraper). But by 1991, Vai and Sheehan were no longer a part of Roth's band, and neither appeared on this, his third solo record (his fourth, actually, if you count the 1985 EP, Crazy from the Heat, which for these purposes, we shall not).

On paper, A Little Ain't Enough might have seemed like a good idea when it was planned and recorded in 1990. In that year, after all, heavy metal and hard rock were still dominating both the airwaves and MTV, and few foresaw the rise of grunge. Produced by Bob Rock (who had produced two popular 1989 albums, Motley Crue's Dr. Feelgood and the Cult's Sonic Temple, and who would later produce Metallica's 1991 self tittled album, to be released in August of 1991), and featuring up and coming, but ultimately ill-fated, hard rock guitarist Jason Becker, there might have been at least some reason to be optimistic. But in the end, it was Roth's last attempt at relevance, and it failed, in part, because 1991 was, as they say, the year punk broke.

Listening to this record in 2009 is like watching awful exploitation flicks from the 1970s; it's difficult to look away at something that is so representative of a dying genre. Certainly, it is characterized by the excess of hard rock, with loud riffs, huge amps, and, of all things, horns. Some of the songs remain catchy, but they can only be the guiltiest of guilty pleasures.

The Internets alert me that there were three singles from the album that charted, those being "A Lil Ain't Enough" (which can't really be called the title track if one word is spelled differently), "Sensible Shoes," and "Tell the Truth," but I can only recall the first two. Surely only the most devout fans of Roth can identify anything he did after 1991 (with the possible exception of the two new tracks he contributed to the Van Halen greatest hits album in 1996). And so it was.

A sad footnote: Becker, the young guitarist, would be diagnosed with Lou Gehrig's disease shortly after joining Roth's band and was unable to tour in support of the album.
Posted by Ransom at Thursday, December 24, 2009
Labels: 1991, Hard Rock

You can forgive Dave for taking the music business even less seriously during 1990/91 than he did when he was flashing those assless chaps in '86. Just get a look at the video for A lil' ain't enough and you know he's very well aware of things and obviously taking the piss. Grunge: here today, gone later today. One of Diamond Dave's best and most underrated albums without the big names supporting him.

Very underrated album. It is actually better than Skyscraper which is full of Synth sounds and special fx.. Yes this album was meant for 88.. Love this album

Who gives a shit what cri-dicks say, David Lee Roth is ROCKS Greatest Front Man ever, and his solo albums are of the highest caliber of musicianship, and showmanship, DLR's achievement have set the Bar so high in all area's of the music business, no one has even come close to topping him, and they most likely never will ! ! !

What also didn’t help Dave is how old he looked in lil ain’t enough video. It looked like he aged 20 years between 1988 and 1991